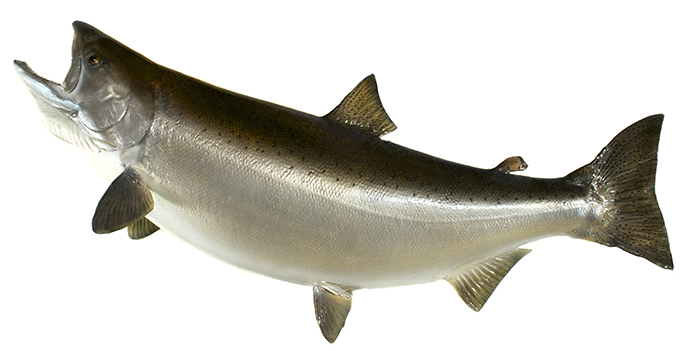 Vancouver Island is known worldwide for its fresh and saltwater fishing. It is also home to the “Salmon Capital of the World” so it’s no surprise that king fishing lies on our beautiful coast. Five salmon species can abundantly be found in our waters and they include sockeye, coho, chinook, pink, and chum.

Weight: Average 5 to 15lbs
Length: Range from 24 to 33 inches in length
Description: Sockeye are blue tinged and silver in colour, with prominent glassy eyes and a moderately forked tail while living in the ocean. When they return to spawning grounds, their bodies become red and their heads turn green.

Weight: Average 7 to 20lbs
Length: Average 24 inches
Description: Coho Salmon are often fast and erratic, frequently leaping out of the water and putting up a fight. They are bright silver in colour with dark blue backs and scattered spots on their tails. Their mouths and gums are white, but their tongues are black, and they have sharp and strong teeth.

Weight: Average 10 to 50lbs
Length: Range from 24 to 36 inches
Description: The largest of all the salmon species, the Chinook is blue-green, red, or purple on the back and top of the head, with silvery sides. They have a black gum line and a v-shaped tail that is generally covered in spots.

Salmon trips start at $1000 per 8 hour day-trip for 3 people. Overnight trips are an extra $250 with included meals. Additional group members are extra.